Its hard to believe but March is here Bass and Specks have started bedding and then moved back off when the dreaded cold front came through with North winds and river running backwards made for some tough fishing . Now that the weather is staying warmer they will move back to the bedding areas and can be caught on wild shiners , topwater baits and senko type baits for bass and small jigs and minnows for specks .

It has been a very busy month with now being affiliated with Bassonline.com a fishing referral service and also fishing and filming with Steve Quinn from IN-FISHERMAN tv show where we fished and filmed for three days on the river out of Astor . We fished for specks and did pretty good in Lake Woodruff fishing small jig heads with Berkley trailers in pink color we tossed them under a A-Just-a-bubble Float (which I really like ) check it out on line at Rainbow Plastics.com on 6 lb test line fishing very close and very slow to the masses of weed patches on the west side of the lake produced some nice size ones if we fished farther out from the weeds smaller and more could be caught but we were looking for Quality not quantity .

We caught Bass on top-waters made by Rapala on Lake Dexter working them very slow in the dollar pads and on shiners fished in a couple creeks off the main river . As far as trips go my customers have been catching both specks and bass in the canals in Astor on jigs and minnows and wild shiners for the bass .

I regret to say that in Feb. we lost a great young Fisherman that had a lot of talent and was going to go far in the fishing business to a Vehicle accident . Kevin Hunter lost control of his truck in the early morning hours and it rolled and he was thrown out . Kevin was a regular tournament fisheman with the College Team and some of the smaller tournaments around the area , I have spent a lot of days in the boat with him when he was younger and remember the first time I let him drive my Bass boat and the first Bass he caught off a Bed in a tournament that I helped him with he had Big Bass and third place in that Teen Sportfishing tournament along with all the bream and wild shiners we caught on bread while fishing from the boat and the dock behind his house .

Kevin did not care what he fished for as long as he was fishing ! He will be missed by all that knew him .

The show will air sometime in about a year . 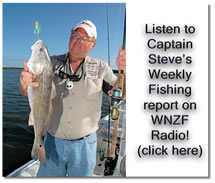